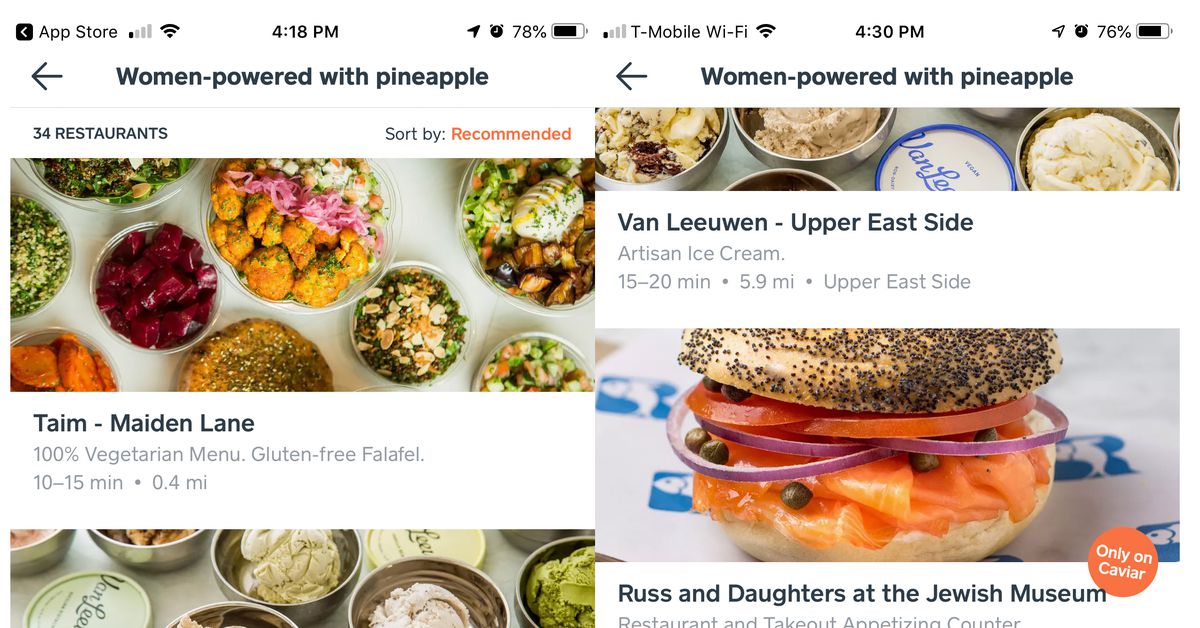 Food-giving apps give you pizza and salads without even talking to restaurants. You may spend days without worrying about who makes your food. But the Startup Caviar in delivering meals wants to highlight where your dollars actually went when you order all those pizzas and salads. It has created a permanent, eye-catching area at the top of its app, aimed at companies that belong to women or run by women.

So far, only a handful of restaurants are included in the app's area – 34 near me in downtown Manhattan. However, users can also name other restaurants for inclusion in a Google Form. The criteria: All restaurants that women have as chefs in the kitchen, as entrepreneurs or as leaders of teams.

Women who are driven by pineapple can feel indecent.

The partnership feels somewhat unconventional in some ways. Caviar partnered with Pineapple Collaborative, a platform for women to talk about food and share experiences. Therefore the section in the app is strangely named "Women-Powered with Pineapple". There is also a slogan that feels awkward about Pineapple, which sounds crude.

Also, the section in the app does not show women's faces, or even details, whether a business is owned by a woman or a chef. By tapping on any restaurant you can easily get to the usual food. Nevertheless, Caviar plans to hold events with women-run restaurants in San Francisco, New York, Los Angeles and Washington to raise awareness.

It is rare for a food serving app to highlight restaurants where women run the kitchen or own the business. Sure, some food delivery apps have been trying to get local restaurants to feel involved and seen. For example, the tech start-up Slice has built its reputation for connecting local pizzerias without a lot of online presence to attract customers who prefer to order.

Caviar, Postmates, DoorDash and Uber Eats also go the other way. They experiment with exclusively deliverable kitchens where they work with local restaurants to deliver food without physical presence. This can also increase the turnover of the restaurants, but with a minimal sense of community.

Building the community is not achieved here because the feature is so limited, but it's still a fascinating idea. We want more apps and restaurants to try to bring us closer to the kitchen ̵