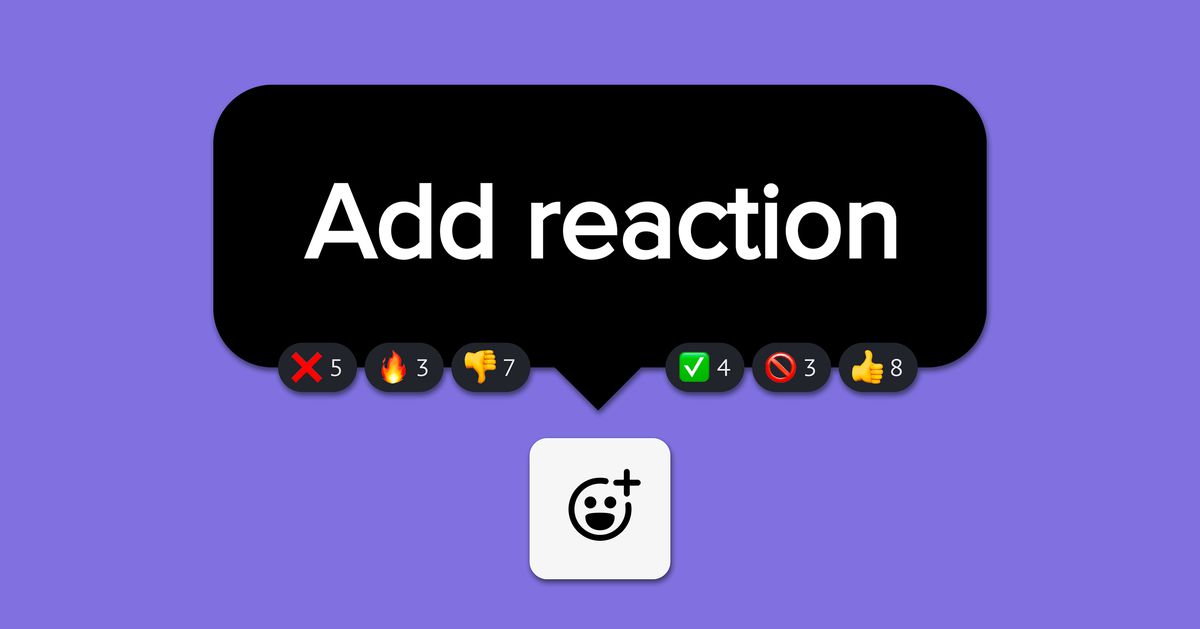 Many of us are online much Nowadays more than usual, and a lot more of our communication is also completely virtual. When we enter the sixth month of pandemic life, it means for once small nuisances in the virtual communication that you have maybe used to slip may have felt like an all-consuming social indiscretion.

The edge The newsroom became a debate on such a topic after reading Angela Lashbrook’s great piece A zero about how Instagram’s reaction buttons are a scourge. You should go read it! It inspired us Spending most of an hour arguing about the merits of emoji responses as a whole. Some of us are anti-response while others are pro-response (* waves *). The conversation was long and intense enough that we decided to put our thoughts together in one place.

; are bad for the same reason that read receipts are bad (see here for a full discussion on them). Messages that are just “read” or “responded to” feel like unconfirmed commands for attention. Usually you share or say something because you want to connect with a person through something you’ve sent, whether it’s a link to a story, a meme, or a “what’s up?”
“A reaction is equivalent to a nod in response.”

A reaction is equivalent to a nod in response. If that happened in person, it would be really strange! People expect something in return for their reach, at least I do. With that said, I accept responses to simple logistical texts like “See you soon” or “I’m late”. Completely valid! Perhaps imagine someone sending a link or meme while trying to connect with you – a nod or a reaction will not be enough.

Nicole Wetsman: Reactions are useful! I often use them when a friend sends a link or a picture or something random while talking about something else. The reaction allows me to show that I value the good link or the good picture without having to interrupt the conversation. They’re also good for group messaging, especially when you return to your phone to view a range of texts. You can confirm that you’ve read previous texts and jump in the middle of the convo. It’s pretty easy to use them as being passive-aggressive, which is bad, but there will always be a way to be passive-aggressive towards text. I like their perk, even if they are another text etiquette thing to worry about.

“Nothing rages me more than an empty ‘thumbs up’ reaction in iMessage.”

Makena Kelly: Nothing makes me angry more than a blank “thumbs up” response in iMessage. You can use my meme, selfie, or my “Haha” or “Heart” message, but if that response isn’t paired with a follow-up message, you may have left me unread too.

I’ve always viewed myself as a pretty terrible conversational text. I live for long phone calls and FaceTime conversations after days or even weeks of not chatting. So when I take the effort to speak to you regularly about text – finding interesting answers and being especially interested in the tiny details of your everyday life – I expect the same energy in return. A unique response to my message signals to me that either I am about to get spooky or I should just leave you alone. I don’t mind if someone takes hours to answer, as long as that answer ends up being thoughtful.

But don’t get me wrong – I think reactions have their place in virtual conversations, just maybe not during a pandemic. As Ashley mentioned, if I am running from the train station to your apartment or restaurant and I get the message, “We’re right here, we’re in the corner”, I will “act” quickly to notify you are on the same page . However, reactions should not be viewed as a substitute for conversation. And really, the only thing more cruel than thumbing up my text is turning off your read receipts seemingly out of nowhere.

Bijan Stephen: Reactions are fine, read receipts are fine, and smart replies are fine too. I don’t think it’s important to be an asshole about how you use the technology. For example, reading receipts is only important if you expect the person you are communicating with not to respond in a timely manner – which would be the case anyway, even if they weren’t there.

“What is important, I think, is not being an asshole about how you use technology.”

I think the real problem is that when everyone has gone digital – out of necessity! – Everything is gamified. In other words, you can now easily determine whether you are really friends with someone – or whether they consider you to be a real friend. In this area, there are many analogous relationships between “not texting” and “seeing yourself now and then”, which works when the connections with people are primarily ambient and not proactive.

The internet has made us all human who need to take the first step. It kind of sucks! But it really has nothing to do with technology, imo.

Barbara Krasnoff: Two thoughts. Firstly, I’m not a quick phone typist, so it takes me forever (compared to most people) to return a simple text or chat message. And if the news comes at a bad time – while I’m in the middle of a meeting, at a doctor’s appointment, trying to explain Zoom to my mom, or whatever – then I have the choice of either ignoring the news entirely until I have the time to deal with it or give a quick response (either automatically or via emoji) until I have time to get it … and just hope everyone on the other end understands.

“In my eyes, a quick emoji is … better than nothing.”

Second, once upon a time, in the age of the dinosaurs, when people were talking on the phone, and when the other person was busy or unavailable, you would eventually have to hang up and call them back. You can leave them a message later. While it could be hugely frustrating, the person you called was not expected to be available all the time and immediately. Now they are – but none of us can really be. In my eyes, a quick emoji or auto-reply when I’m in a position where I can’t type but can only tap a single button is better than nothing.

Monica Chin: With all due respect, I think many of the arguments against reactions miss the point. None of them criticize that they react themselves. You criticize people who don’t make an effort to reply to messages. These people have been around since the dawn of the internet and will be around for many years to come. Some of these people just aren’t in headspace right now to send messages, others don’t like texting at all, others are busy at work, others are just lazy. Before responding, these people did not send long and hearty replies. They just sent “lol” or “nice” or didn’t reply at all. The presence of reactions doesn’t make it easier for these people to cut their answers in half. it just gives them another vehicle to do this with.

“Before responding, these people didn’t send long and hearty responses.”

But why react well? Because, I would argue, they are a better Vehicle for chat laziness than the others at our disposal. I would much rather get a “haha” reaction than get no answer at all. It lets me know you read my message so I can stop waiting and send messages again in the comfort of my own without worrying about double texting, and it gives me a feel for your reaction. I think reactions are also preferable to quick one-word responses, as the latter come with cultural baggage that emoji haven’t had time to build. No one disagrees that a thumbs-up reaction means “I agree” and a laugh reaction means “I admit this is funny”. But the message “haha” might as well mean “That was really funny” as it was “That wasn’t funny at all and I don’t want to talk to you.” These types of answers are a breeding ground for rethinking and misinterpretation, especially between parties who don’t know each other well. Reactions make things easier and save us these problems.

“The six responses in iMessage just don’t give me enough emotional reach!”

Jay Peters: I’m pretty pro-responses, but I’m pretty pro-emoji in general. (I helped create two of these!) But I love emoji so much because I think they add a amount from emotions to computerized interactions that are sometimes difficult to sort through emotionally. At a time when we communicate almost exclusively through digital media, without hearing a person’s voice or seeing their body language, I think it is almost necessary to be able to show that kind of nuance. Even though it sometimes means people sending confusing or annoying hearts on iMessages.

And me strong I believe software makers could go a lot further to help people express themselves with emoji reactions by following up on Slack and letting people use each emoji on the emoji keyboard instead of a few. The six responses in iMessage just don’t give me enough emotional reach! And they can easily lead to unsatisfactory answers, as some of my colleagues have described in detail here.

Human emotions are much more complex than heart, thumbs up, thumbs down, haha, two exclamation marks and a question mark. Tech companies should give people more opportunities to easily express their full range of feelings.

Fargo Season 4 Recap: A Story That Sounds A Little Too Familiar