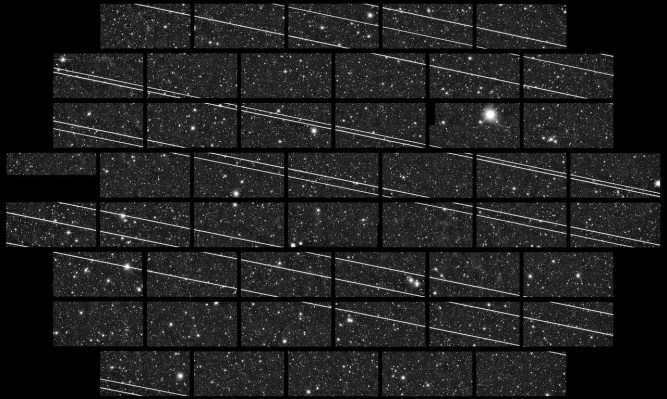 The International Astronomical Union has released the preliminary results of a study of the possible effects of several thousand satellite constellations, such as that created by StarLink. When the body found that earth-based astronomical observations could be "severely impaired," he warned that weakening and rules should be formed sooner rather than later.

The group expressed concerns last summer, but conducted a broader investigation and investigation of possible effects that prompt various observatories and organizations to intervene. The general feeling is one of "hope for the best but prepare for the worst".

The IAU estimates that there will be tens of thousands of satellites on Earth at one time. An orbit of about 1

,500 will be above the horizon at some point, although fewer (250-300) would be more than 30 degrees above the area that is usually observed by astronomers.

"The vast majority" will also be weak to see with the naked eye, except in certain periods when sunlight is more likely to be reflected from their surfaces – generally in the early morning hours of darkness. Measures are being taken to reduce the visibility and reflectivity of these surplus satellites, but we will not be sure how effective they will be until they are up there. At this point it is of course too late to do anything about it. [19659002] "Of more concern", as the IAU puts it, is the potential impact on wide field observations such as the Large Synoptic Survey Telescope (recently renamed Rubin Observatory). Nearly a third of the 30-second exposure from such telescopes could be affected by overhead satellites, which are far more visible to their sensitive instruments.

There may be ways to get around this, but it is hard not to read any feeling of frustration in the IAU statement:

Theoretically, the effects of the new satellites could be mitigated by accurately predicting their orbits and observations Needs to be interrupted during their passage. Data processing could then be used to further "clean up" the resulting images. However, the large number of paths could cause considerable and complicated costs for planning and operating astronomical observations.

In other words, if the operators of these constellations refuse to do anything about it, there are at least a few things we can do. However, they will not be without cost or disadvantage.

All of this relates exclusively to problems with visible light. A possible interference with the observation of radio frequency and other invisible radiation due to the transmission of these constellations is still unknown.

Although the IAU's statement takes care to maintain a veneer of neutrality, it is clear that they are all rather disturbed.

"Great attention is also paid to protecting the pristine view of the night sky from dark places, which should be considered an inalienable human world heritage," they write. “There are no internationally agreed rules or guidelines for the brightness of rotating artificial objects. While this was not a priority issue until now, it is now becoming increasingly relevant. Therefore, the IAU will regularly present its results at the meetings of the UN Committee for the Peaceful Use of Space and draw the world's government's attention to the threats posed by a new space initiative for astronomy and science in general. "

In other words, they won't sit quietly in their observatories and let a handful of companies mess up the night sky.