Breaking News
Home / Innovative / Bill and Melinda Gates say the US pandemic’s “shocking” response is due to “terrible leadership”.

Bill and Melinda Gates say the US pandemic’s “shocking” response is due to “terrible leadership”. 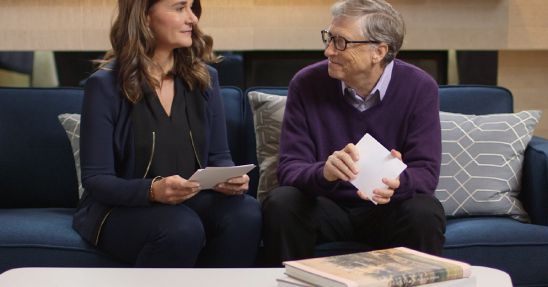 America’s response to the COVID-19 pandemic has been “shocking” and “incredible,” and things were made worse by “terrible leadership,” Bill and Melinda Gates said in a series of interviews this week.

The couple condemned the United States for botching its pandemic. Not only did they criticize the Trump administration for its inaction, but also national agencies like the Food and Drug Administration (FDA) and the Centers for Disease Control and Prevention (CDC), which had made major mistakes over the past year.

“You know, this has been a badly managed situation at every step,”

; said Bill Gates Stat News. “It’s shocking. It’s incredible – the fact that we’d be among the worst in the world.”
“Science should never be politicized. Science is about finding out the truth. “

Speak with AxiosMelinda Gates said the only reason America faces such a high death toll than other developed countries is because of “lack of leadership”. As Melinda put it, “We frankly had terrible leadership on this issue. And science should never be politicized. Science is about finding out the truth. “When asked if any other variable explains the impact of COVID-19 in the US compared to other developed countries, Melinda said it was” our leadership and response “to blame.

The Gates identified a number of flaws in American strategy. Bill Gates criticized the CDC for creating an “overly complicated test” for the virus, saying that commercial laboratories should only be paid to process tests if they deliver their results within 24 hours (a goal the US has rarely reach says Stat News). Taking it longer gives the virus more time to spread, Bill said. “You can write apology notes to the people you have infected in the meantime.”

Melinda Gates meanwhile said it was a “tragedy” that the Trump administration announced plans to cut all funding for the World Health Organization (WHO). She noted that the organization was “not perfect” but that it was nonsensical to cut ties with an agency tasked with coordinating the response to global health crises during a pandemic. “You’re just not pulling out of WHO in the middle of a crisis,” she said. After the US government, the Bill & Melinda Gates Foundation is the WHO’s largest donor with a share of 10 percent of the budget.

The interviews contain the toughest criticisms the Gates of America pandemic has voiced to date, and coincide with the release of the Bill & Melinda Gates Foundation’s 2020 Goalkeepers Report. This annual report tracks global progress towards the United Nations’s key goals, including eradicating poverty and hunger and increasing access to health care and education.

Usually the report finds slow and steady progress towards these goals. But this year the pandemic has reversed global progress. Schools have closed, malnutrition is increasing, poverty has increased worldwide and vaccination rates are falling dramatically.

“In the blink of an eye, a health crisis turned into an economic crisis, a food crisis, a housing crisis, a political crisis,” the report said. “Everything collided with everything else.”

The pandemic was an economic disaster that resulted in job losses and income losses. This has dire consequences, meaning families cannot put food on the table, while young people are forced to forego education that could change their future in order to scrape together enough money to survive. According to the report, the financial loss caused by the pandemic is twice that of the 2008 “Great Recession” and the last time so many countries were in recession was during the “Long Depression” in 1870.

In terms of the number of people in extreme poverty worldwide (defined as people living on less than $ 1.90 a day), the report found that the numbers had increased for the first time in 20 years. Extreme poverty is expected to increase by around 7.1 percent in 2020, which means around 37 million more people will fall into this category compared to the previous year.

Access to vaccines, which the report says is a “good substitute for the functioning of health systems”, is also affected. Last year, the proportion of children worldwide who received all WHO-recommended vaccines was over 80 percent (up from just five percent in the 1970s). This year that number has dropped to around 70 percent, which corresponds to the vaccination rate in the 1990s. The report says, “In other words, we were set back about 25 years in about 25 weeks.”

Of course, not all of these effects are permanent, and many of the trends described in the Goalkeepers 2020 report can be reversed. But the Gates say this will require a global response to the pandemic that focuses on vaccination and restoring economies to normal.

In a comment for The Financial TimesThe Gates believe that an integral part of the global vaccine response should be equality. If richer countries hoard vaccines instead of distributing them to more populous nations, it will result in a longer pandemic, greater number of deaths, and more sustained economic hardship.

When vaccines are given to countries in proportion to their population, 61 percent of deaths can be averted. If they go to high-income countries first, that number drops to 33 percent, say the gates, which are based on models created by Northeastern University’s Mobs Lab.

“The pandemic and economic recession are global and national solutions are insufficient. Boundaries are meaningless to pathogens and become less economical with each passing year, ”the couple write. They add that there is “no difference between the moral and the selfish argument” for a fair distribution of vaccines. “A fair worldwide distribution of Covid-19 vaccines would end the pandemic faster for everyone. And for every month we shave, the world saves around $ 500 billion, according to the IMF, ”they write.

“You will not be able to get the US to treat itself as just a random 5 percent of the world’s population.”

Speak with The New York TimesBill Gates said America’s current position on vaccine development “looks selfish”. In the Trump administration’s Operation Warp Speed, the government paid six pharmaceutical companies $ 11 billion to develop a vaccine Times, and in return the US has received at least 100 million doses from each company. But only three of these programs need to be successful to immunize America, and excess vaccines could be distributed worldwide to end the global fight against COVID-19.

However, Bill notes that convincing the US to take this course of action could be difficult, especially since US taxpayers have already paid two-thirds of the cost of clinical trials and vaccine production. “You will not be able to get the US to treat itself as a random 5 percent of the world’s population,” he said Times.

Another way, Bill says, is to increase the amount of foreign aid the US offers to other countries. While America is the world’s largest foreign aid donor in absolute terms, America contributes just 0.25 percent of total GDP, compared to three times that in the UK and the Netherlands and four times that in Sweden and Norway. According to Bill, the pandemic is an opportunity to double that number to 0.5 percent of US GDP – a change that would have a huge impact on repairing the damage caused by the pandemic.

“As they say,” said Bill the TimesTo paraphrase a famous quote attributed to Winston Churchill: “The US government, after trying everything else, is doing the right thing.”

The Asus ROG Zephyrus G14 has exceeded the need for vowels

Apple is removing Epic Games’ ability to distribute games and patches on Mac. Fortnite: Save the World is no longer playable