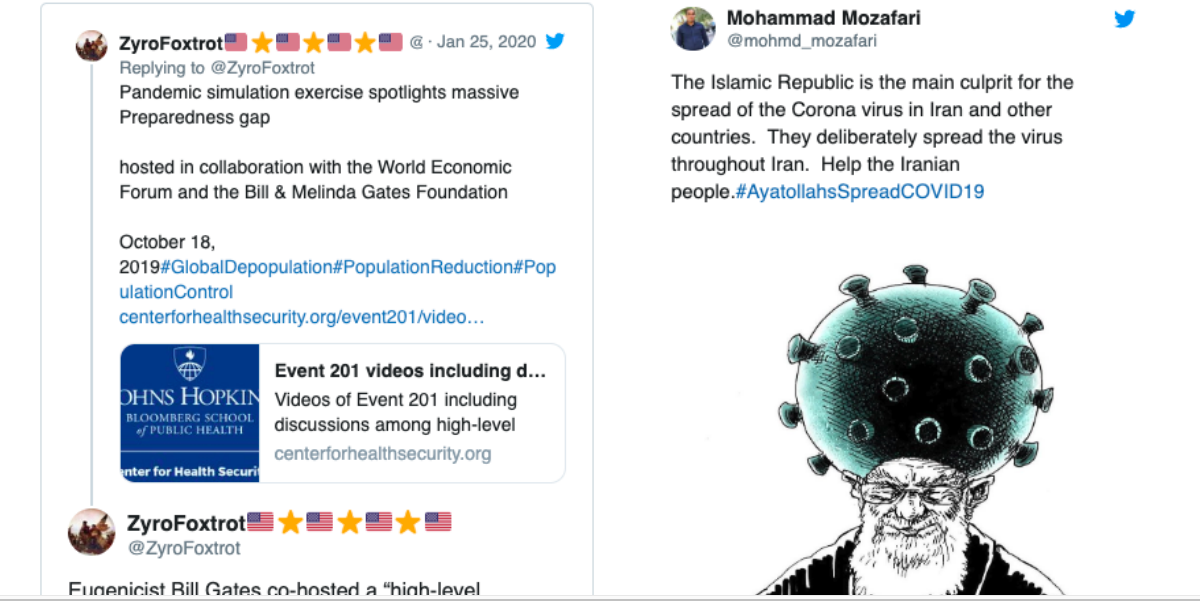 Disinformation about COVID-19 has exploded in the past few weeks. Campaigns used a combination of bots and people to sow fear and confusion when verifiable information has become a matter of life or death.

According to a new report by Blackbird.AI, a large number of actors are using the confusion surrounding the corona virus to get people to amplify false and misleading information. With the almost unprecedented impact of COVID-19 around the world, virtually every player in the disinformation wars, from nations to private players, is breaking into the breach.

"If it is beneficial to create social chaos, some kind of seed discord, then they all spring up," said Blackbird.AI CEO Wasim Khaled. “COVID-1

9 is the disinformation Olympics. Every predator is involved in this event. “

In the past few weeks, many of the leading online platforms have tried to curb the information war made possible by their services. To direct users to helpful websites, many of them now place links to reputable scientific or government sources at the top of feeds or search results.

And they implemented other tactics to turn the tide. Pinterest has highlighted verified health advice, while Facebook provided unlimited free advertising to the World Health Organization. In the meantime, Google has announced it will invest $ 6.5 million to fight misinformation.

Voice assistants like Alexa and Google Assistant are still struggling to answer questions about COVID-19. The UK has set up a rapid disinformation response team to deal with the rush of incorrect information online. Today, an EU official beat up players like Google, Facebook and Amazon because they continued to make money from fake news and disinformation.

Blackbird.AI was founded in 2014 and has developed a platform that uses artificial intelligence to search through vast amounts of content to analyze disinformation events. It uses a combination of machine learning and human specialists to identify and categorize the types of information that flow through social media and news sites. Blackbird. AI can separate information created by bots from human-made content and track how it is amplified.

Typically, the company works with companies and brands to monitor changes in their reputation. However, with the outbreak of the COVID 19 pandemic, the company focused on a new threat. The aim is to raise awareness among companies and individuals in the hope that they can curb the virality of disinformation campaigns.

"Anyone who observes this spread is fairly familiar with the concept of flattening the curve," said Khaled. "We always used a similar concept. We described disinformation as an infection, with the virality being the driver."

Unfortunately, the spread of disinformation is still in the exponential part of the curve.

For his "COVID- 19-Disinformation Report, the company analyzed 49,755,722 tweets from 13,203,289 unique users on COVID 19 topics between February 27 and March 12. The number of tweets in this category increased when Italy introduced bans and the Dow Jones broke in. Of these tweets, the company found that 18,880,396 were "inorganic," meaning that the tweets were manipulated in a way that was inconsistent with human behavior.

Measuring the ratio of inorganic content helps the company create a Blackbird Manipulation Index, in which case the BBMI of COVID-19 tweets is 37.95%, which is just within r medium manipulation level.

"We face such an asymmetrical information warfare that is waged not only against the American public, but in many societies around the world. Incredible clip – one of our most vulnerable moments in history, ”he said. “There is incredible fear and uncertainty about what is right and what is wrong. And today people feel that if you do the wrong thing, you could kill your grandfather. It's a lot of pressure and that's why people are looking for information. This offers disinformation actors an enormous opening. “

For example, President Trump held a rally in Charleston, South Carolina on February 28, claiming that coronavirus concern was an attempt by Democrats to discredit him and call him "their new joke" . After this speech, Blackbird.AI discovered an increase in hashtags such as #hoax, #Democrats, #DemHoax, #FakeNews, #TrumpRallyCharleston and #MAGA. A similar increase occurred after March 9, when Italian politicians quarantined the entire country.

"The driving message: Democrats have exaggerated the subject to hurt President Trump," the report said. "The" The Panic "narrative and related spin-offs also included widespread mention of the" runaway "homeless population and high number of immigrants in democratic districts, many of which were unintentionally included in media reports traditionally believed to be credible "

In all of these cases, the hashtags have synthetic origins, but eventually spread so far that real people picked them up and increased their reach. The general goal of such campaigns, Khaled said, is to delegitimize politicians, the media, and medical ones Experts and scientists through the spread of disinformation.

"While all policy makers are still trying to find the best course of action, these campaigns are working very hard to undermine this type of advice," he said was: & # 39; How can we be healthy Downplaying the risks of COVID-19 to the American public and questioning government and health warnings? & # 39; "

Other coronavirus disinformation campaigns include the conspiracy theory that states that the United States produced and engineered the virus biotechnologically China have introduced.

"This content was broadcast on the public media in China," said Khaled. “And of course it was immediately distributed by social media users who believed these stories and reinforced them. It has happened all over the world and in dozens of languages. There was not only the United States and China, but also Iran who accused the United States, the United States who accused China, all of these campaigns were out there. "

While Blackbird.AI may not necessarily identify the originators of these campaigns, Khaled said they generally fall into three categories. The first is supported by the state, nowadays typically Russia or China. The second is disinformation-as-a-service, where people can hire companies to buy disinformation service packages. The third is the "lonely wolf who only wants to see the world burning".

"Everything has the goal of causing a change in perception in the mind of the reader, which urges them to change their behavior or to further spread the narrative," he said.

This doesn't just mean retweeting false messages. Behavioral manipulation can also be used to move fake masks or drugs. And in extreme circumstances, it has created direct threats to life. Khaled noticed that Dr. Anthony Fauci, the infectious disease specialist who will be unveiled at the President's briefings, needed additional security after death threats fueled by online conspiracy theorists. A train engineer also attempted to attack the naval ship entering a Los Angeles port by derailing a train because he believed that another series of online conspiracies about the ship were part of a government takeover.

While Blackbird.AI tries to help Khaled is not optimistic that the campaigns will soon be contained.

"I am 100% confident that this will deteriorate significantly in the disinformation cycle," he said. "Not only do we see no signs that it is slowing down, we also see clear signs that it is increasing significantly." These disinformation actors will now take every possible advantage. People have to be aware. They have to understand that the things they will see may have bad intentions behind [them]they have to go to the CDC, they have to go to the WHO, they cannot take the stuff they see at face value. ”