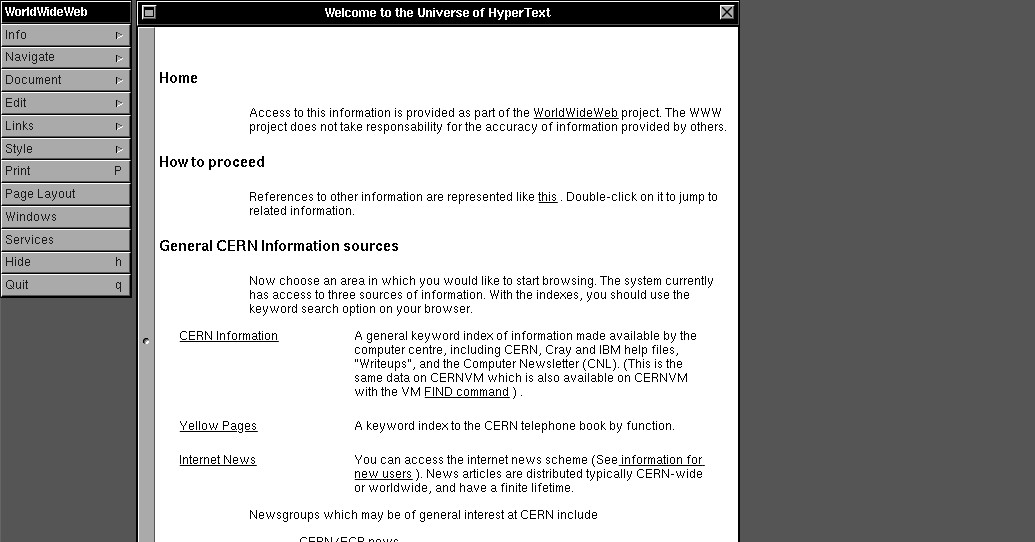 The birthplace of the modern Internet is the European Organization for Nuclear Research (CERN), when engineers proposed the first HyperText browser in March 1989. To mark the anniversary, a group of CERN developers rebuilt this original browser interface (via Engadget ) so that users can see what the Internet looked like from the beginning.

Thirty years ago, CERN's engineers released a proposal for a new program next month to help manage information within the organization called "Information Management: A Proposal." After some revisions, the proposal provided the framework for a program would provide the user with an interface to present information using links to allow users to search the information systems in the organization. Tim Berners-Lee, a CERN engineer, developed the system on a NeXT computer, which he named WorldWideWeb, which became the forerunner of the modern Internet.

To mark the anniversary of this original proposal in March, CERN's developers put together a kind of museum-like website to showcase the origins of the original Internet, including pages, the browser, encoding, history, timeline, typography, and how they used to be Website reproduced. It's a fascinating piece of Internet history and shows the origins of many elements that we take for granted in 201

This includes the original browser that allows you to navigate the site. Not everything works – a series of sections are virtually dead ends, but it's fascinating to leaf through user manuals, newsgroup lists covering everything from "Caribbean Life" to computers, comic books, books, adult entertainment, science fiction Star Wars Movies, Science, Business, Vacancies, and more. My take away was that while the Internet looks very different on the surface, it has not changed so much that it's unrecognizable: People use the Internet to talk about many of the same things they did three decades ago did.