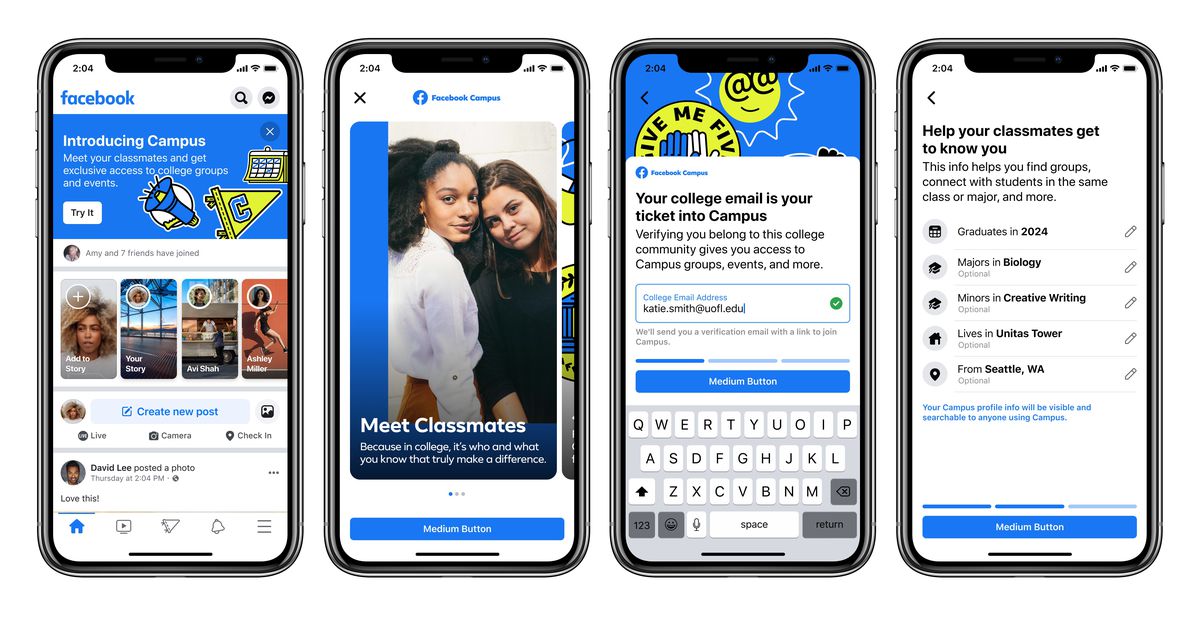 Facebook is returning to its roots today with the launch of a new product called Campus, a section of the main app designed specifically for students. The campus is meant to be a place where students can only interact with their peers at their school. You can access a campus-only news feed and participate in groups, events, and group chat rooms known as campus chats, which are related to life on campus. In reference to the original Facebook, they even have access to a “campus directory”, in which they can find other students and have made friends.

To access campus, students must provide their .edu email address and their senior year. Once there, they create a new profile specifically for the area, although their usual profile and cover pictures follow them to campus. They also have the option to add or remove their majors, class, hometown, dorm, and minor subjects. The more information they add, the more they can find classmates with similarities, which of course also gives Facebook more data on what the college students are studying and who they talk to, which influences ad targeting decisions. Charmaine Hung, PM of Campus says the team chose to keep a separate profile because students may not want to share hyper-specific college information on their public profile.

Currently, campus is piloted with 30 universities in the United States, including Johns Hopkins, Northwestern, the University of Louisville, Vassar, and Virginia Tech. (Not Harvard!) These students cannot interact with each other, and neither can students from nearby colleges. Currently, the campus is isolated so only people attending the same school can see and interact with each other.

Although the campus profile is mainly isolated from Facebook, this setting also applies to the campus if a student has blocked another person on their normal Facebook, and vice versa. If someone off-campus violates Facebook’s community standards, they will also not be able to join the section. Alumni are allowed to stay on campus, even though Facebook sends a notification indicating that they are leaving campus because it is not that relevant to them.

The campus could be a way Facebook is trying to keep students and younger people on the original Facebook app and stay engaged longer. At the same time, it builds the behavior that Facebook has already seen on the platform. Students are already forming groups for their classes, dorms, and interests. Hence, Facebook streamlines the process and takes more control over how students find each other. Interestingly, however, Facebook didn’t incorporate Instagram integration into the campus pilot, effectively setting up the Facebook app as a central campus focus and an absolute requirement for peer search.