LG's answer to the foldable mania is a second screen 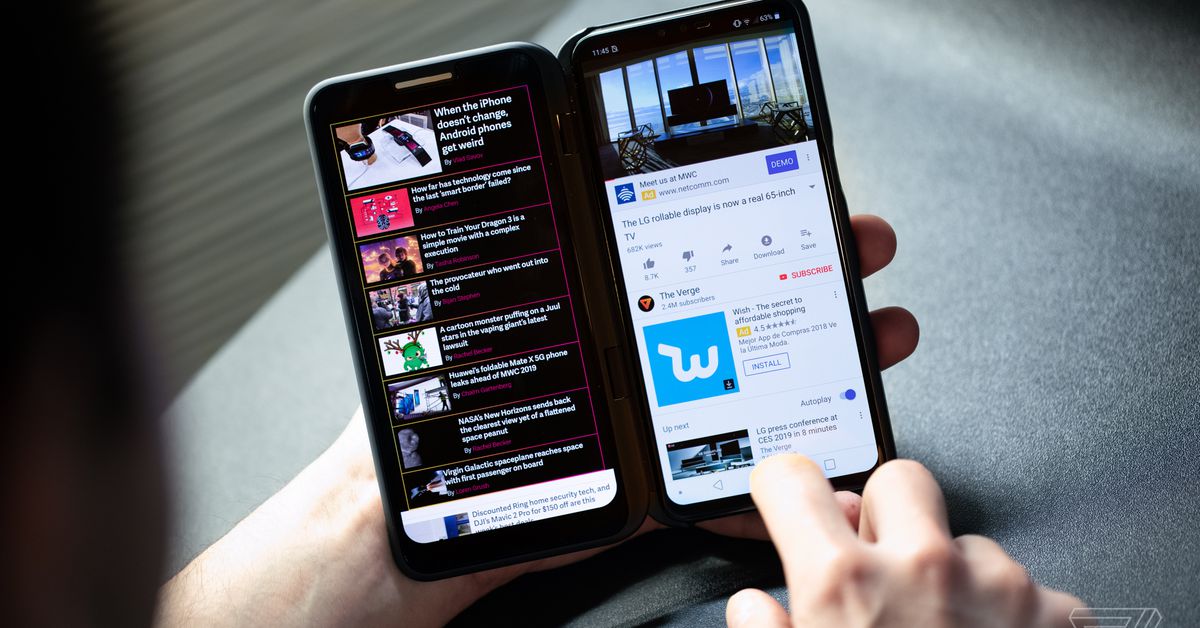 The new V50 LG V50 with the new Snapdragon 855 processor, improved cooling, bigger battery, and the futuristic addition of 5G. The V50 is LG's first 5G phone, in fact, and it's the first to be compatible with a new accessory.

The LG Dual Screen is essentially a folio case with a second OLED screen in it. The V50 has a 6.4-inch display, however the secondary panel is limited to a 6.2-inch diagonal measurement, owing to its bigger bezels.

Starting with the positive, I'm confident that there's demand for this kind of extra screen real estate. The more screen manufacturers can squeeze into a pocketable shape, the higher a price they'll be able to charge. And, indeed, to LG V50 with LG Dual Screen attached to it is pretty much as affordable as the LG V50 itself. It's cool on the case, which can rotate to a full 360 degrees, allowing you to mirror your screen, which can be handy

LG is using a proprietary Wi-Fi chipset that uses very short-range and high-bandwidth communication between the V50 and its extra screen. In my testing of the V50 plus dual screen combo, I was unable to detect any latency or other communication issues between the two panels in front of me.

There are pogo pins on the back of the V50, which connect to the dual screen case and draw power for the battery's battery. LG's new offering are predictable.

LG's new offering is predictable. First, the two screens are not of identical quality: I notice a slight, but detectable, difference in color temperature and viewing angles between them. I therefore do not enjoy the asymmetry in size. LG's software design for this system is not bad, but it does exhibit weird behaviors, as well as showing the on-screen keyboard on the left screen when I'm trying to input something on the right. I also had a mighty struggle getting a racing game to recognize the second-screen simulated gamepad controller, and it's those initial glitches and imperfections that put it on the ground.

It would be naive for me to conclude this by saying "LG has only polish its software," given how many years I've been waiting for LG to do just that on a number of other fronts. And yet, I feel like the company's approach this year has been the most pragmatic and grounded among its competitors. Sure, it's doing a 5G phone, but LG is refraining from launching any flying porcine foldables to wow people without offering them an attainable thing they can actually buy.

LG says it's ready to make all of its future 5G devices compatible with a second display of this kid, though I could not t get the company to commit to this particular model. In other words, every 5G LG phone probably has its own dual screen variation to offer. Oh, and in unhappy news for US V50 buyers, the dual screen option is not offered in the American market.