The good old battle between Mustang and Camaro has been going on since 1966, when it joined the battle and these kinds of gadgets won’t stop too soon. An example of the adventure we have here where two new models (hell, the ‘Stang is a 2020) pull it out in a straight line.

In the green corner we have a 2020MY Ford Mustang Shelby GT350 (unfortunately the last model year for the S550 generation GT550) whose owner had barely broken the machine – this one had about 2,000 miles when it showed up for the race that has brought us here.

As such, the Blue Oval toy came up in factory form, which means we’re looking at a 5.2-liter flat crank that delivers 526 ponies and 429 lb-ft of twist, along with the kind of high-rev screech that defines that style from V8.

In the red corner is a fifth generation Chevrolet Camaro SS, built in the first half of the last decade. This is animated by an LS3 engine, with the 6.2-liter V8 delivering 426 horses and 420 lb-ft of torque. Even so, the example sitting in front of us had received moderate goodies for the aftermarket, with the cylinder heads and camshafts being on the list of goodies.

Now the Camaro is a little less scale-friendly than the GT350, but with this owner removing certain parts of the interior such as the passenger seat, the Mustang̵

7;s advantage doesn’t matter much in this battle.

We see even play in the gearbox department as this is the gear lever version of the Camaro SS while the GT350 only comes with a manual.

The two made it on the road so they walked the rolling start route (please don’t allow this as an example and hit the track if you feel competitive). And you can jump to the 1:07 point on the clip below to sprint. 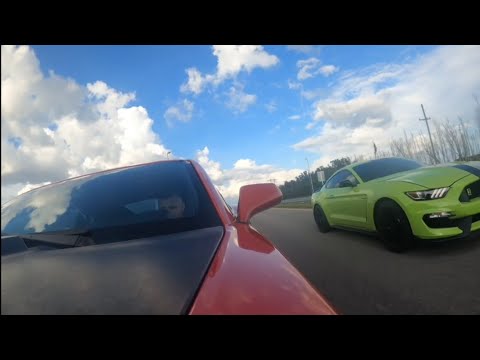