Most watched esports game in August but remains banned in India PUBG Mobile became the most watched esports title in August. PUBG Mobile World League (East) was the most popular tournament last month, peaking at over a million concurrent viewers, according to Escharts, a website that tracks viewership in sports. In particular, the maximum number of spectators was reached during the final round scheduled for August 6th to 9th.

The tournament was also one of the highest in July but failed to reach the top spot. However, the peak at the finals ended with 1.1 million viewers, making it the most popular online-only event in 2020. The report also suggests that the game was number 1 in India, while Hindi viewers drew 35.8 percent Total contributed to the tournament̵

7;s ‘Hours Watched’ number. The recent ban on the game in India is also said to bring “major changes” and a statistical decline. 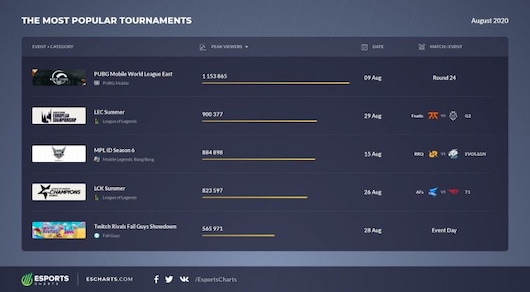 Following orders from the Indian government to ban 118 Chinese apps in the country, PUBG Mobile has been removed from popular app stores. While the Indian gaming community didn’t take this well, PUBG Corp eventually stepped in with an official statement giving hope to its fans. The original in-house gaming brand under Bluehole Studios issued an official statement stating that it will assume all publishing responsibility and will no longer have any connection with Tencent specifically in India.

According to a report, PUBG Corp is now supposed to be looking for an Indian game company to restore the country’s popular game. Sources related to the matter suggest that only a licensing agreement will be made and PUBG Corp will retain the publishing rights to the game. The Indian partner will most likely handle the distribution. However, there is still no official confirmation from PUBG Corp or PUBG Mobile India. As of now, the game is banned and downloading it officially and unofficially is illegal in the country.

Paytm fires back after Google Play Store rips the app