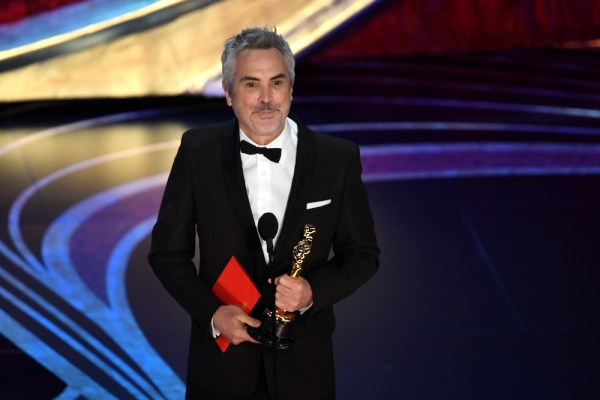 Alfonso Cuarón won an Oscar for directing the film. It was his second win in this category after his previous "Gravity" award. And it is the fifth time in six years that Best Director went to one of the "Three Amigos", a trio of renowned Mexican directors Guillermo del Toro and Alejandro Iñárritu.

"Roma" is based on Cuarón's childhood in Mexico City, as it was said by the eyes of the Cleo family. It went into the night with 10 nominations, with "The Favorite" tied for the most nods. Ultimately, he won the awards for the best camera, the best foreign film and the best director.

"Being up here does not get old," Cuarón said as he accepted the best director. He thanked the Academy for recognizing "a film directed to an indigenous woman ̵

1; one of the 70 million domestic workers in the world without labor rights – a figure who has traditionally been pushed into the background"

Netflix spent an estimated $ 25 million to $ 30 million on "Roma" – a particularly impressive sum, as the film cost $ 15 million. The company also decided not to simultaneously publish films on streaming and in theaters. (The exclusive theater window of only a few weeks was not enough to convince the big theater chains.)

While "Roma" was the big hit story of Netflix's streaming scene, Netflix's "Period. End of sentence. "Won for the best documentary (short motive). The "Ballade of Buster Scruggs" of the Streamer also received three nominations, although they won in any category.

In the meantime Hulu's "Minding the Gap" was nominated for Best Documentary, but lost to "Free Solo".

In addition to the streaming news, "Black Panther" was the first superhero movie to be nominated for Best Picture. Finally, the Best Costume Design, Best Production Design and Best Original Score prizes were taken home. Also on the superhero front: "Spider-Man: Into the Spiderverse" won Best Animated Feature.

And since I wrote about First Man, he has won Best Visual Effects!

The awards were presented at a ceremony without hosts for the second time in Oscar history. Instead of a monologue, there was a montage highlighting all sorts of films from last year, and then came Tina Fey, Amy Poehler and Maya Rudolph, to make some host-style jokes before being awarded the Best Supporting Actress Award awarded. [19659002] And how did I feel about the results? Well …

If the Green Book wins the best picture, I'll set this TV ablaze