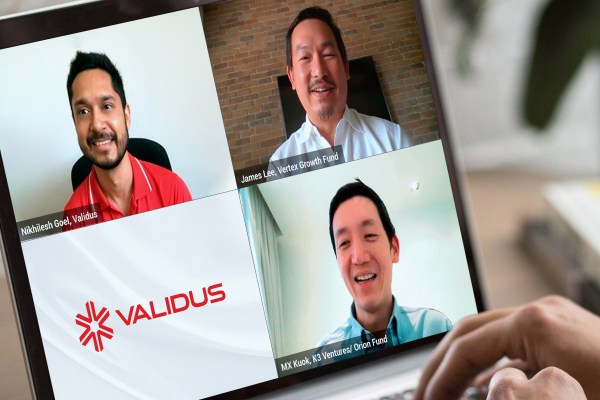 Small and medium-sized businesses are one of the most important parts of the Southeast Asian economy, but many have problems getting growth capital from traditional financial institutions. Validus wants to close the funding gap with its peer-to-peer lending platform, which connects accredited lenders to SMEs. The Singapore-based startup announced today that it has raised $ 20 million for its ongoing Series B + round.

The funding was co-led by the Vertex Growth Fund and Kuok Group’s Orion Fund, managed by K3 Venture Partners. Recurring investors in the round include FMO, the international development bank of the Netherlands; Vertex Ventures Southeast Asia and India; Openspace Ventures; AddVentures; and VinaCapital Ventures.

5, including a $ 15.2 million Series B round announced last year.

After Validus received its capital market services license from the Monetary Authority of Singapore in December 2017, the company launched services in Indonesia and Vietnam, claiming to have lent more than $ 315 million to companies to date. The B + series is planned to expand to Thailand in the last quarter of this year. Validus’ credit risk model analyzes information from invoices, contracts and cash flow.

Co-founder and COO Nikhilesh Goel says the company saw increased demand for short-term financing during the COVID-19 pandemic, with the number of unsecured loan-approved loans increasing 50% year over year in recent months.

Despite the pandemic’s impact on small businesses, credit performance has remained stable as Validus focuses on financing business providers for SMEs whose end users are large companies or state-owned companies.

Validus also plans to fund SMEs that are at the forefront of the fight against COVID-19, including working capital for SMEs in the healthcare and pharmaceutical industries, as well as logistics and cleaning services.

“By working closely with corporate partners and investors on the platform, we also want to support SMEs that are aligning their businesses to adapt to the services and products that are required during this time,” said Goel. “Over the past month, we have paid out several such loans averaging $ 250,000 to $ 500,000 to support SMEs’ efforts to meet the demand for face masks and other protective equipment.”

In a press release, MX Kuok of K3 Ventures said: “We are very impressed with the leadership and depth of experience in credit management at Validus. The team has demonstrated a unique ability to collect critical data points, combined with extensive machine learning capabilities to identify potential SMEs that may have been left behind by the gaps in the traditional banking model. “