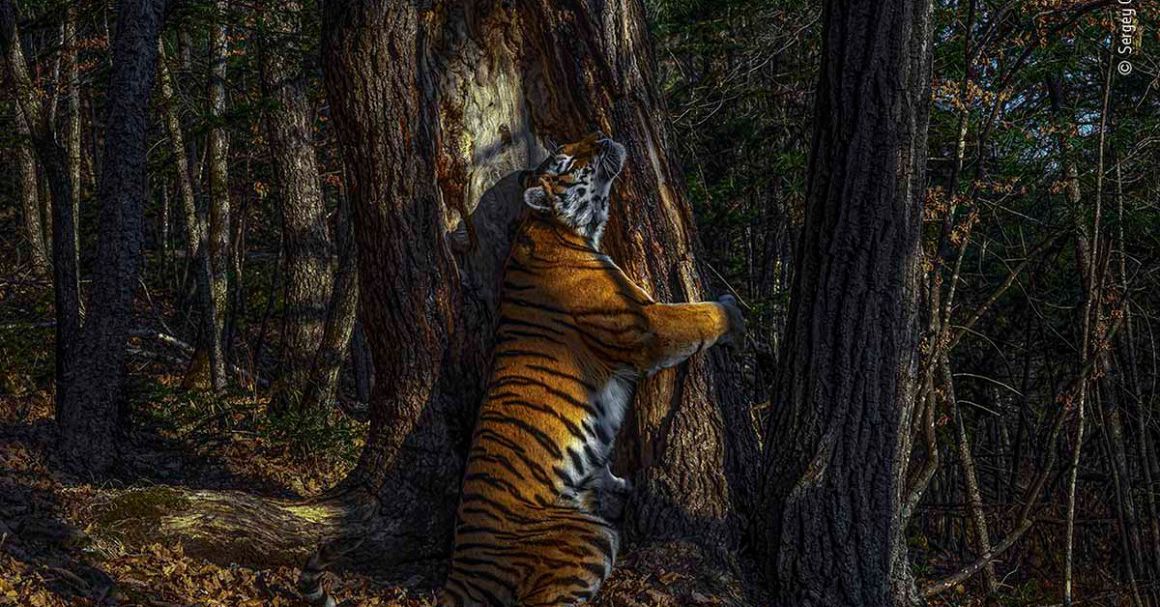 A Siberian tiger just gave the world the hug it needs in 2020. The intimate moment was captured in front of the hidden camera by Sergey Gorshkov, whose photo “The Embrace” just earned him the prestigious title of Wildlife Photographer of the Year.

In the photo, the endangered tiger is standing on its hind legs, its front legs wrapped around a Manchurian fir tree. The big cat’s face is deliciously at peace as it marks the tree with its scent.

7;s a scene like no other, a unique look at an intimate moment deep in a magical forest,” said Roz Kidman Cox, chairman of the jury, in an October 13 statement. “Waves of low winter sun highlight the ancient fir tree and the fur of the giant tigress as she grips the trunk in obvious ecstasy and inhales the scent of tiger on resin, leaving her own mark as her message.”

Their message resonated with the judges who selected the winner from more than 49,000 entries to the prestigious annual competition at the Natural History Museum in London. “It is also a story that is told in beautiful color and texture of the comeback of the Amur tiger, a symbol of the Russian wilderness,” said Cox.

Siberian or Amur tigers are a subspecies of the tiger with a great comeback history. By the late 1940s, hunting had decimated its population – spread across the Russian Far East, northeast China, and the Korean Peninsula – to just 20 to 30 wild individuals. Russia was the first country to grant legal protection to tigers in 1947. Although poachers and loggers are still threatened, up to 550 Amur tigers roam their ancient territories today.

Gorshkov, a founding member of the Russian Union of Wildlife Photographers, took his photo in the Russian land of the Leopard National Park. He set up motion sensor cameras and waited more than 11 months to collect his award-winning shot with a Nikon Z7 and a 50mm f / 1.8 lens.

The comeback cat faced damn cute competition from other creatures caught in a moment of serenity. Photographer Mogens Trolle won the Animal Portraits category with a photo of an endangered proboscis monkey basking in the sunlight in Sabah, Borneo.

Jaime Culebras caught this manduriacu glass frog hanging out in the foothills of the Andes in Ecuador, eating a snack.

This year’s young photographer of the year, Liina Heikkinen, captured a completely different mood. Heikkinen won the award for her photo of a snarling young red fox trying to keep the remains of a barnacle goose to himself. Replace the feathers with toilet paper and you have a meme for the early days of pandemic shopping.

“A sense of stealthy drama and hectic urgency enlivens this image,” Shekar Dattatri, a wildlife filmmaker and another member of the jury, said in a statement. “A great moment in natural history, captured perfectly.”