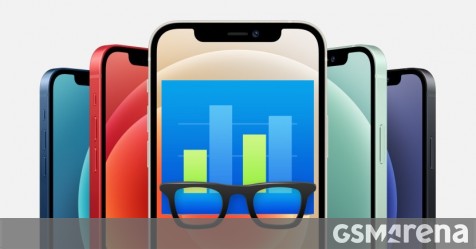 The biggest phone announcement of the week, of the month and probably of the whole year is behind us, as the iPhone 12 series is already official. Since Apple has a tendency not to reveal some specs of its phones (especially RAM and battery capacity), we will have to wait for the first benchmark results to get the real values. These also help to measure the performance of the new chipset. Well, Geekbench is now filled with multiple listings for the new iPhones that give us the RAM capacity and also show us what the A14 Bionic chipset is capable of in a synthetic benchmarking environment.

When Apple first introduced the A14 platform, it promised 40% better CPU performance and 30% better GPU numbers compared to the A12 series. Yes, Apple compared its latest chipset to one from yesterday in lieu of last year’s A13, and now that seems to be due to the small performance gains the new chipset offers.

Compared to last year’s A13 Geekbench offerings, the new iPhones offer an improvement in single-core performance of almost 20% and a jump in the multi-core test by only 8%. The new numbers from Geekbench also suggest that the A14 chip is geared more towards saving energy than increasing performance, which makes sense given the 5G tax on battery life. Check out the full list of iPhone 12 Geekbench runs at the source link below.