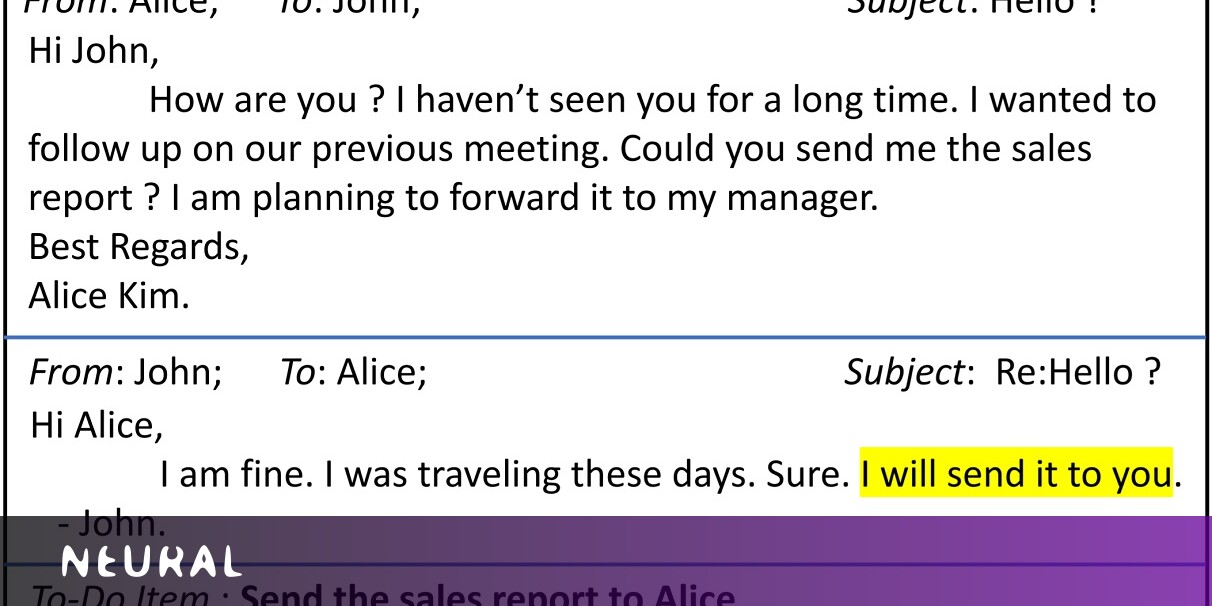 Researchers at the University of Washington and Microsoft’s AI team today introduced a “smart to-do” tool that can automatically generate task lists from emails.

Smart To-Do is an AI function that searches your outgoing emails for actionable text and converts your self-assigned tasks into elements on an automatically generated task list.

For example, if you tell your boss to give him an update of your Amsterdam account by noon on Wednesday, the AI ​​will put something like “Update the boss’s Amsterdam account” on your to-do list with the appropriate information.

The (hopefully) upcoming feature was revealed in a research report released today on arXiv before printing. According to the paper:

In this work, we present the task of automatically generating tasks from email context and metadata in order to support users in fulfilling their promised actions (also referred to as obligations in this work). Given an email, its temporal context (i.e. the thread) and the associated metadata such as the name of the sender and recipient, we would like to generate a short and concise task element for the task mentioned in the email.

It’s pretty easy to see how incredibly useful this can be. Instead of leaving your inbox to set up your to-do list before you forget it, you can just squat and really answer all of your emails knowing that the AI ​​would write your commitments.

The team basically had to rebuild the system from scratch. To the best of our knowledge, there is no similar AI system, and that means that Microsoft had to develop everything from the task parameters to the data sets on which its deep neural networks were trained. The result is a robust pipeline for converting text to tasks in the email environment that, according to the research report, simply works.

We can’t wait to try Smart To-Do, but there’s a catch. There is no guarantee that it will actually be available in Outlook or other services soon. Pre-printed papers can change at any time, and big tech often works on features that never end up in production.

However, we managed to find this official stub for Smart To-Do on the Microsoft research page. Apparently, researchers will be presenting Smart To-Do at the annual conference of the Computing Linguistics Association (ACL 2020), which will take place online in June. This is a good sign of the future of the feature and we can expect a lot more information about it.

We contacted Microsoft to find out if and when Smart To-Do was sent via email. We will update this article as soon as we receive feedback.

This mini e-bike is almost perfect for its price

Apple clashes with Microsoft, Google and Facebook over cloud games