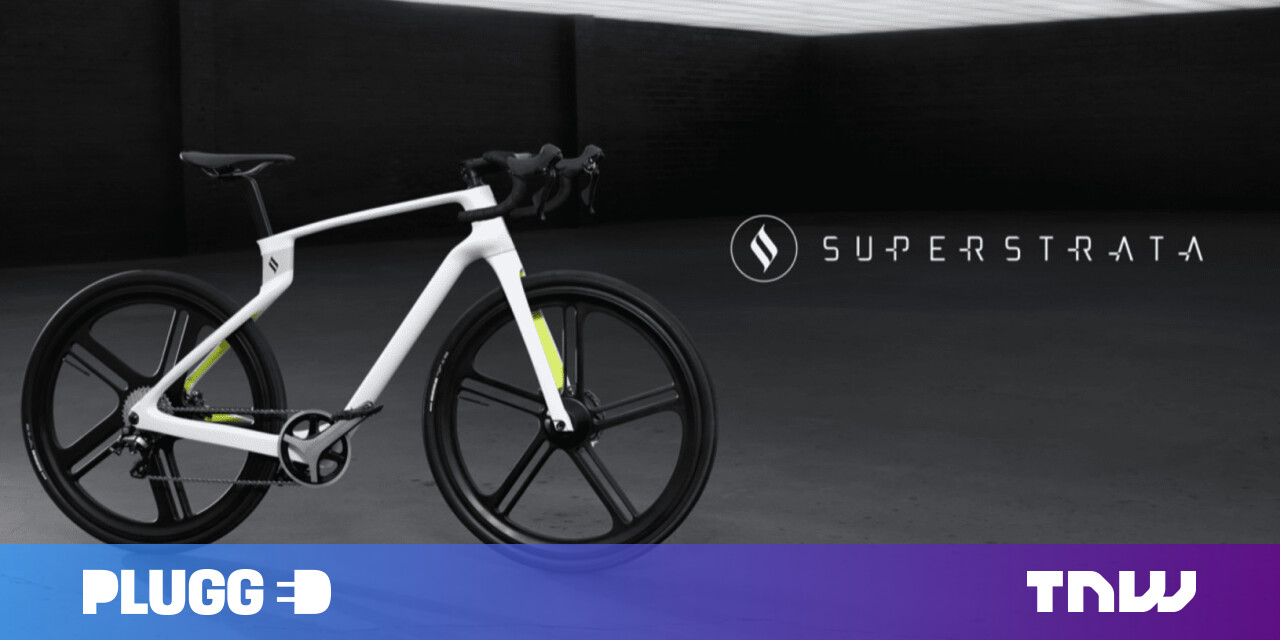 For all e-bikes that can make transportation easier and more pleasant, there is one complaint that continues to be pursued: weight. Slowly but surely we are seeing more and more e-bikes that approach the weights of traditional bikes with clever designs and lighter components.

An upcoming bike called Superstrata, which is to be pre-ordered today on Indiegogo in both regular and electrified versions, is intended to further expand the limits of lightweight e-bikes through the use of a 3D-printed unibody carbon fiber manufacturing process.

Weighing around 24.2 pounds for the electric model known as the Superstrata Ion, the bike is not only lighter than virtually any other e-bike, but it also claims to be much more permanent than existing carbon fiber, steel and aluminum models. And I say “approximately”

; 24.2 lb because the Superstrata has another trick up its sleeve: the 3D printing process means that each model is individually tailored to the individual driver and allows up to 500,000 variations of the unibody frame.

The Superstrata is manufactured by a Silicon Valley company called Arevo, which previously developed components for the aerospace and medical industries. The CEO, Sonny Vu, had previously co-founded Misfit, the fitness wearables company. The idea of ​​building a bike seems to have started to demonstrate Arevo’s 3D printing technology before the company is taken seriously. The company hired Bill Stephens, an experienced bicycle designer whose StudioWest consulting firm developed products for Giant, Cannondale and others to refine the product.

Most unibody carbon fiber frames require careful placement and variety of carbon fiber sheets around a mold, using thermoset composites that are then basically “cooked” for curing. It is a tedious, hand-made process that inevitably leads to deviations from model to model.

Instead, Arevo’s 3D printing process uses a thermoplastic composite that hardens immediately when printed and, according to designer Bill Stephens, is said to be “significantly harder and much more impact resistant” in a 2019 Eurobike presentation in which prototype models are discussed. 3D printing also theoretically gives Arevo more control over how resilient its frames are to the various dynamic forces that bicycles are regularly exposed to, and allows the company to quickly repeat designs.

According to Arevo, it’s not really about making the lightest carbon frames anyway. The Superstrata Terra, the non-electric model, has a total weight of around 16.5 pounds – very light but not unknown.

However, the proof lies in the pudding. The Superstrata’s strength claims make intuitive sense, but I’d like to see the company show us that its prototypes can meet their demands with some well-designed durability tests against the competition.

It’s also worth noting that the frame and weight are impressive, but the electronics have nothing special to offer with a 250 W rear hub motor, a speed limit of 32 km / h, and a 125 Wh battery. Arevo claims that you will get up to 60 miles from this tiny battery, which may be possible with a torque sensor and lightweight frame, but I would consider the actual range to be less.

Still, the technology behind the design is impressive and the possibility of thousands of variations through 3D printing is exciting. If you liked the idea of ​​a bespoke, 3D-printed carbon bike, you can pre-order the Indiegogo campaign. The first units are expected to be delivered in December.