This is how the weather looks like on Uranus and Neptune 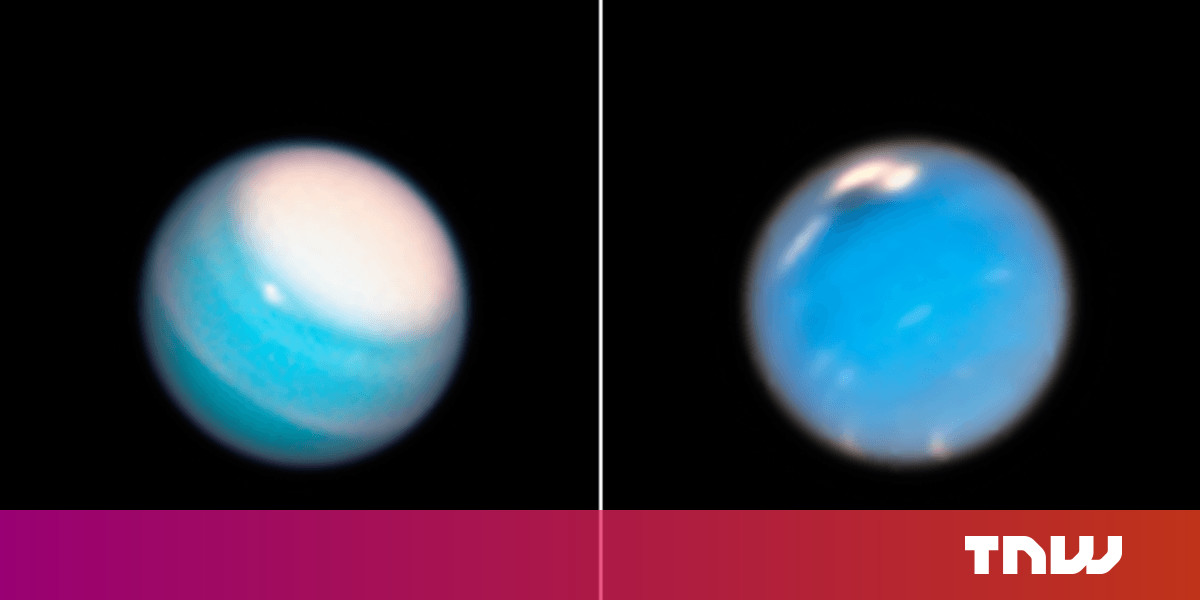 The outer part of the solar system may be the least explored, but the scientists have been able to uncover some of their secrets in the last few weeks. On New Year's Day, the NASA spacecraft New Horizons first encountered the icy object Ultima Thule and illuminated its formation. Astronomers have recently discovered a hitherto unknown moon orbiting Neptune and named Hippocampus.

Another discovery, thanks to new images from the Hubble Space Telescope, is that in both atmospheres there are a multitude of fascinating weather patterns, Neptune and Uranus. So how about going there?

With a fourfold diameter of the Earth, we typically call Uranus and Neptune "ice giants." Unlike gas giants, Saturn and Jupiter, Neptune, and Uranus have lower levels of hydrogen and helium and higher concentrations of heavier material such as methane, water, and ammonia.

Uranus is particularly interesting as it is also the only planet in the Sun system that rotates on its side. A northern summer on Uranus lasts 21 years, with the North Pole exposed to constant sunlight, while the South Pole is constantly getting dark.

This inclination to the Uranian axis is probably the result of an early collision of the solar system with an object as large as the Earth. Such a collision would either have released the planet's internal heat storage or created a particle layer that effectively isolates the interior of the planet – preventing the heat flow into space. Neptune, who has avoided such an encounter, still has a heat flow to the outside. Therefore, both planets have almost the same temperature (within a few degrees), although Uranus is closer to the Sun by 33 percent.

The absence of any appreciable internal heat flux on Uranus means that the planet's atmosphere prevails is significantly less active than Neptune's. In fact, in the winter, the Uranian atmosphere is the coldest planetary atmosphere in the solar system. As Voyager 2 flows past Uranus in 1986, the planet appeared as a largely blunt green-blue disc. However, in the years since then, scientists have recognized that even this seemingly cold, dead world has a surprisingly dynamic atmosphere.

However, the new images of the Hubble Space Telescope show a previously invisible giant white cloud, probably made of ammonia or methane ice, encasing the North Pole (see picture above). At the edge of this huge cloud system is clearly a smaller cloud of methane ice to see, which rotates around the larger cloud edge. These cloud structures can be seasonal and result from the constant sunlight at the North Pole.

Around the equator of Uranus you can also see a thin band of clouds (upper picture), although this cloud band is preserved so close is currently not understood. The wind speeds on Uranus are so high that it blows clouds with up to 560 miles per hour, which would spread out over large surfaces to the outside. All planetary atmospheres have a Breitenumlaufsystem that should theoretically distribute this cloud band over larger latitudes. It may be that these methane clouds are somehow restricted by these circulation patterns due to altitude or chemical instability.

If we could visit Uranus, the winds at a depth equal to the atmospheric pressure of the Earth's surface could reach up to 250 meters per second, or about three times as fast as a Category Five hurricane. Bring your coat as well, as the temperatures at this depth have cold temperatures of -20 ° C.

As strong as the winds of Uranus are, they are nothing compared to those of the other ice giant. Neptune offers supersonic wind speeds of over 1,300 km / h and numerous storm systems. The best-known of these features was the Great Dark Spot, which was closely observed by Voyager 2 in 1989. This huge storm system covered an area equivalent to about one-sixth of the Earth's surface.

The latest Hubble images show another storm system near the North Pole, accompanied by bright clouds of methane ice crystals. The reason these features appear darker than their surroundings is because they are holes that provide a view into deeper layers of the Neptunian atmosphere, much like the eye of a hurricane on Earth can see the surface from space.

As with Jupiter and Saturn, it is believed that these gigantic storm systems are driven by heat from the planet that was left about 4.5 billion years ago from the birth of the planet. Once again, a visit here would be problematic, with temperatures similar to those of Uranus, but twice the wind speed. In fact, Neptune is the windiest planet in the solar system.

The ice giants are the most commonly observed species of "exoplanet" planets orbiting other stars than our Sun. Knowing more about Uranus and Neptune, we can therefore understand more about planets throughout the universe.

Of course, the ideal plan would be to travel to these worlds. Unfortunately, except for the long distance, the exceptionally cold temperatures, violent storms and strong winds make them particularly unsuitable for a human visit. For now, we just have to rely on telescopes like Hubble to tell us about our local ice giants.

Who is afraid of OpenAI's big, bad text generator?