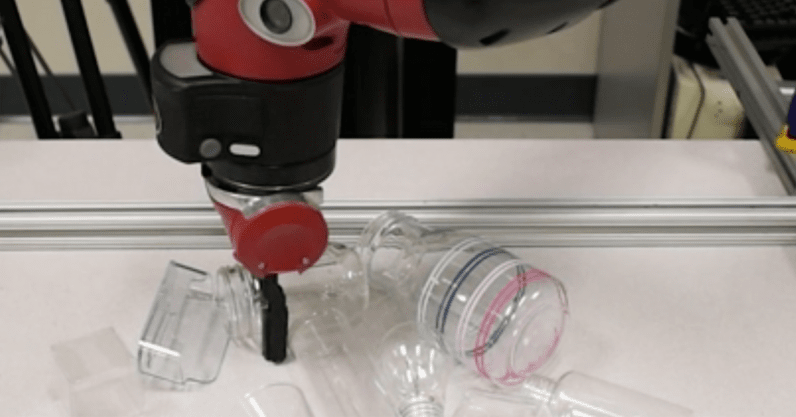 Robots are pretty good at picking up objects. But give them something shiny or clear, and the poor droids will likely lose their hold. Not ideal if you’re looking for a kitchen robot that can slice a piece of cake for you.

Their confusion often stems from their depth camera systems. These cameras point infrared light at an object to recognize its shape, which works quite well with opaque objects items. However, if you place them in front of a transparent object, the light is scattered directly by and reflected by reflective surfaces, making it difficult to calculate the shape of the object.

Carnegie Mellon University researchers have found a fairly simple solution: adding consumer color cameras to the mix. Her system combines the cameras with machine learning algorithms to recognize shapes based on their colors.

[Read: How an AI learned to stitch up patients by studying surgical videos]

The team trained the system with a combination of deep camera images of opaque objects and color images of the same objects. As a result, different 3D shapes could be derived from the images ̵

1; and the best places to grip.

The robots can now pick up individual shiny and clear objects even when the objects are in a pile of clutter. Try it out in action in the following video:

The team admits that their system is far from perfect. “We sometimes miss it, but for the most part it has done a pretty good job, much better than any previous system for detecting transparent or reflective objects,” said David Held, assistant professor at the Robotics Institute at CMU.

I’m still not sure if I would trust him with a razor-sharp kitchen knife. Unless I was really hungry and didn’t want to leave the couch.