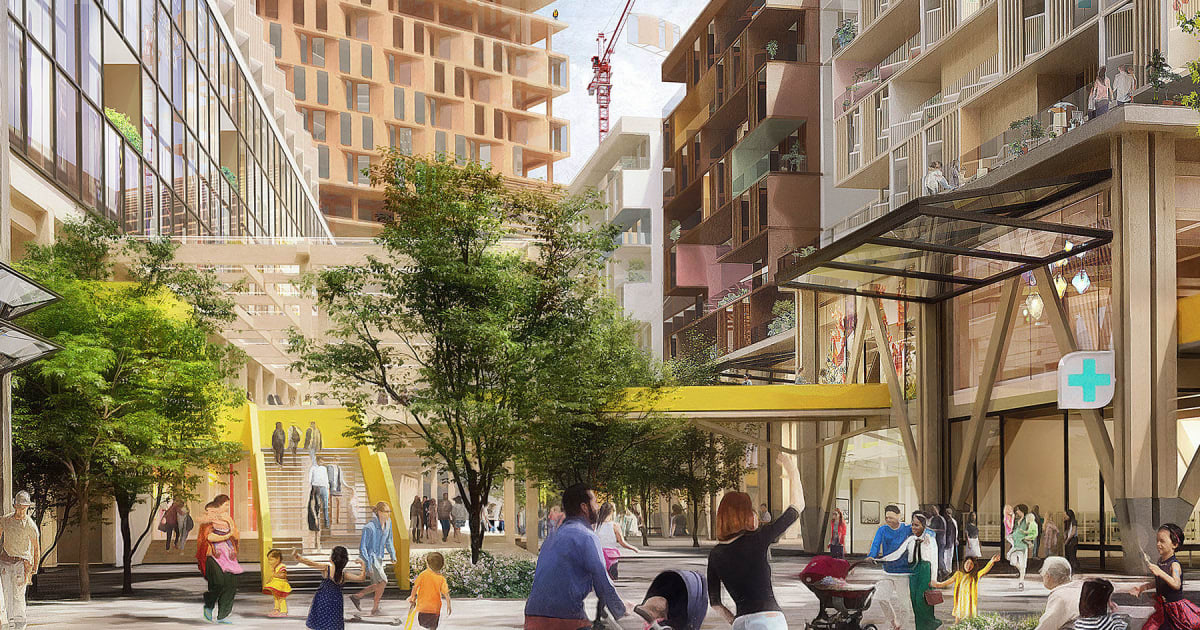 The technical assessment divided the four-volume MIDP into 160 different proposals. Sixteen of these proposals have been labeled "unsupportive," which means "new solutions need to be explored," Waterfront Toronto said in a discussion guide that will inform a second round of the public consultation.

The organization rejected an "efficient" and "ultra-efficient" living concept that would have been around seven percent smaller than the corresponding "standard unit" from Sidewalk. The proposed houses would have used multipurpose furniture, such as height-adjustable benches that could serve as desks or shelves, and flexible walls that could shrink and expand spaces. Sidewalk believed that eating together and working together could work in addition to a combination of internal and external storage services.

Alphabet considered a "lantern forest" in which eight people were used. Meter-high kiosks clumped together like trees to protect people from the wind.

Other rejections fell in front of Quaysides brick buildings. Sidewalk Labs had prototyped a special "raincoat" awning that could protect nearby pedestrians from rain, wind, and blinding sunlight. The company believed that they could be attached to a single building and tied with peg-like posts, or placed like a canopy between two buildings. Similarly, the design of the MIDP suggested "fanshell" huts for parks and other outdoor areas. They would be available in two versions – a "shell" close to the floor or a "fan" that sprouts up like an umbrella – and made from an origami-style fabric that can be folded and packed away if necessary.

Alphabet also considered a "lantern forest" concept using eight meter high kiosks that were clumped together like trees to protect people from the wind. They could be used in open spaces exposed to the elements, or strategically placed in so-called "urban canyons" that create narrow wind tunnels between shops and homes. However, Waterfront Toronto rejected the concepts of raincoat, fanshell and lantern forest. "We are excited to continue to seek solutions for outdoor comfort in our Quayside building designs, which we will continue to review with Waterfront Toronto," said Sidewalk Labs spokeswoman Keerthana Rang.

Most of the other refusals related to funding. Waterfront Toronto questioned the suggestion that it would have to make recurring payments to subsidize advanced infrastructure, including the heating network. It was also inconsistent with funding, the one for a quaysi de Neighborhood Association, or with the idea that 5 percent of the homes should be available to owners for partial rent and ownership through a shared equity program.

However, these setbacks are overshadowed by the preliminary approvals in the technical assessment. There were 92 solutions that Waterfront Toronto would support if all of the financing and delivery was done by the private sector. The organization approved another 24 with a promise to support additional government funding. The last 17 were solutions it would support while pushing for relevant policy changes and regulatory reforms. The 144 approved measures include solid wood buildings, roofs covered with solar panels and / or vegetation, incentives to own electric vehicles and charging infrastructure, intelligent waste chutes and the heating network.

These "agreed changes" probably refer to the "threshold problems" that Waterfront Toronto had when it published the MIDP. The three government's biggest concern was Sidewalk's intention to expand beyond Quayside with a 62-acre river district that would consist of five neighborhoods: Keating East, Villiers West, Villiers East, Polson Quay, and McCleary. Google also asked to be the main developer at Villiers West and to build a new Canadian Google headquarters on the 8 hectare property.

In an open letter, Waterfront Toronto said the planned expansion was premature. "Waterfront Toronto must first see its goals and objectives on the quayside before deciding whether to collaborate in other areas," said Steve Diamond, Chairman of the Board of Directors of Waterfront Toronto. "Even then, we would only promote the full cooperation and support of the city of Toronto, especially when it comes to urban properties." It also rejected Sidewalk Labs' proposal to become a lead developer and reiterated that it would go through a "competitive public procurement process" instead.

Sidewalk Labs agreed to all of Toronto's demands. This means that the evaluation process can continue for the time being. However, the project has divided citizens who want change, but are wary of Sidewalk's connections to Google. Waterfront Toronto has until the end of the year to decide once and for all whether the project should continue. Until then, it is likely that Sidewalk will have to continue negotiating its master plan and making compromises.

"It won't be an easy negotiation, but I believe there is a will on both sides for it to work," said Sheldon Levy. A member of the six-member committee that reviewed the technical assessment said in a letter to George Zegarac, a colleague and CEO of Waterfront Toronto.

Update 2/21/20 12:10 PM: Sidewalk Labs comment added that many of the "non-supportive" decisions were the result of the "threshold issues" that were negotiated and resolved last year.