Twobird is a collaborative email app from the developer of Notability 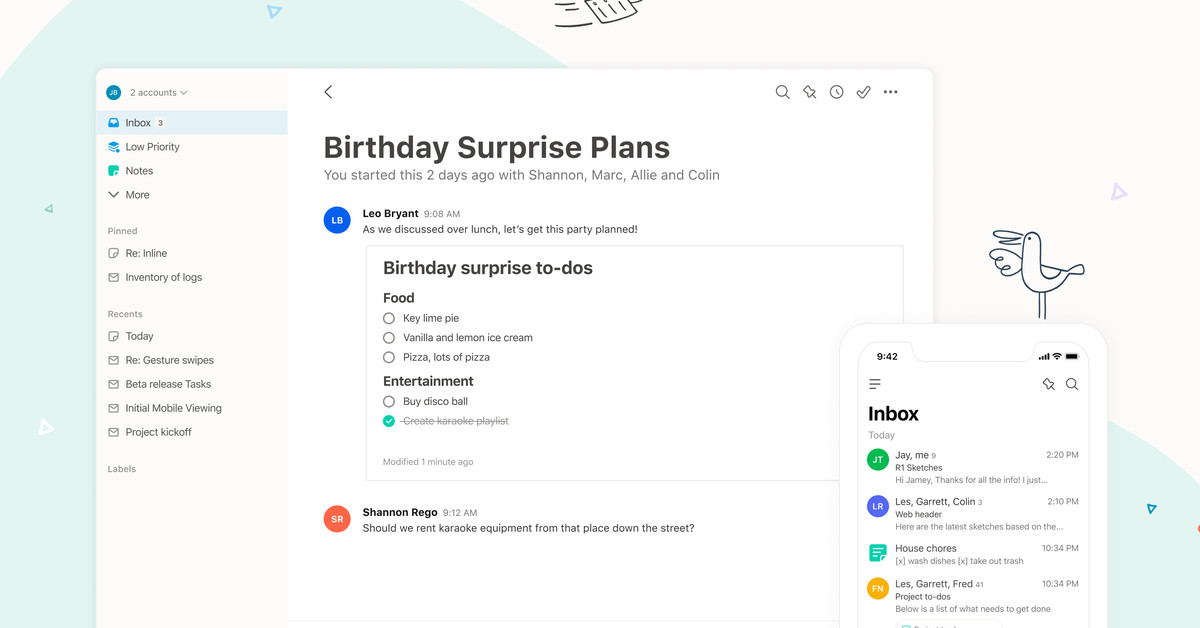 Twobird is a new email application from Ginger Labs, the company behind the popular Notability note-taking application that wants to make email easier and more powerful. Today it is fully launched after an early access beta that started in September last year.

The “powerful yet simple” philosophy in Twobird manifests itself in two ways. The “simple” part is in things like the slimmed-down user interface, which removes a large part of the emails such as repeated signatures or complex formatting, as well as an automatic “tidying up” function to delete your inbox and to unsubscribe easily. However, Twobird tries to stand out with new features that are overlaid and add collaborative notes and task lists directly in line with emails.

The result is an email app that feels much more like a real-time communication tool like Slack, with responses, @ mentions, and thread comments to reply and update things instead of back and forth emails. None of this is completely new, but the approach of treating notes and lists as emails is certainly an interesting idea.

Despite the company’s pedigree as a developer of a note app, Twobird’s notes only live in Twobird. There is currently no cross-compatibility with Notability or other apps. And if you take full advantage of Twobird, generally all members of your team or social group will need to use Twobird. However, Ginger Labs makes every effort to make it easier for non-Twobird users to participate. For example, notes can still be viewed and edited by anyone you share the link with without having to create a new account.

Twobird is also the rare email app that is supported across platforms. A web app as well as iOS, Android, MacOS and Windows versions of the software are available. Twobird currently only supports Gmail and G Suite accounts, but the company continues to work on adding Outlook support. The apps can also be used for free, with the aim of keeping it that way for consumers and ultimately adding premium-paid tiers across the board for larger teams.

TikTok collected MAC addresses in its Android app for 15 months