Battle for the supermarkets! Woolworths and Coles are embroiled in a price war as they cut prices on hundreds of items for Christmas

Bargain hunters will be spoiled for choice this Christmas thanks to hundreds of discounted items at Coles and Woolworths.

Australia’s leading supermarket chains are embroiled in a fierce price war as they vie for customers in the lead up to Christmas 2020, the country’s first recession in 29 years.

Woolworths will cut prices on more than 140 in-store and online items starting Wednesday September 30th, while Coles has already cut 190 of its bestsellers.

Jars of cranberry sauce are only $ 2.50 at both stores, but Coles is $ 5 cheaper for tiger prawns, while Woolworths is just a step ahead at ground beef patties. 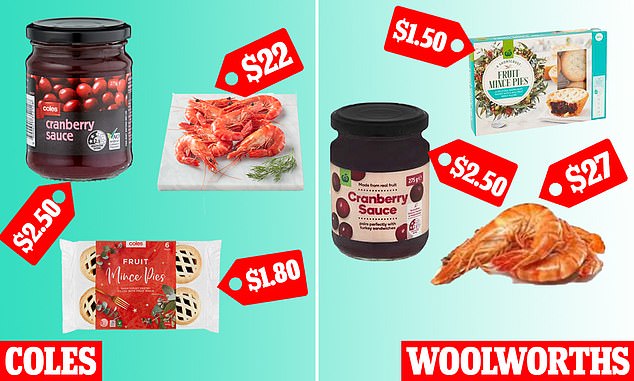 Battle for the supermarkets: Coles and Woolworths have discounted hundreds of items in the run up to the holiday season, including festive favorites like cranberry sauce, prawns and mince pies

Dozens of festive favorites have been discounted, with six-packs of private label mince pies dropping from $ 2 to $ 1.80 at Coles and from $ 1.70 to $ 1.50 at Woolworths.

Seafood at lunchtime is cheaper than ever. Kilos of black tiger prawns are $ 28-22 at Coles and $ 30-27 at Woolworths.

The cost of cranberry sauce has also been reduced. In both supermarkets, the glasses have been reduced from USD 2.65 to USD 2.50.

Greg Davis, chief executive of Commercial and Express at Coles, said the company recognizes the growing need for affordable products as the unemployment rate in Australia stands at 920,000, or 6.8 percent.

“We are determined to cut the cost of Christmas because we know this is more important than ever,” he said.

How the supermarkets stack up

Along with the festive discounts, Coles has permanently cut prices on some of its most popular ranges.

Select types of Steggles Chicken are down a whopping 45 percent while Nature’s Gift pet foods are down 30 percent.

Woolworths also cut prices on grocery and popular kitchenware collections as part of a multi-million dollar investment designed to keep customers in their back pockets for Christmas.

Bags of Lindt chocolate are being reduced from $ 8 to $ 6, and the full range of Bickford’s savory flavors dropped from $ 4 to $ 3.60 from September 30 through December 24.