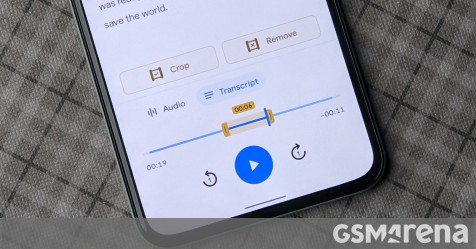 Google first introduced its advanced voice recording app with the Pixel 4. It improved Google’s ability to transcribe text without an internet connection, and it works surprisingly well. It was a very easy way to record a conversation or interview and then go back and search the text to find the important parts. The app will later be made available for older Google Pixel devices. Version 2 of the Google Recorder was introduced yesterday for Pixel users and preinstalled on our Pixel 5 test device. A new feature lets you cut out parts of the recorded audio by simply selecting and cutting out transcribed text. This makes it easy to remove unwanted audio from a recording without having to listen to the recording.

The new version of the app also lets you create visual waveform videos to accompany your recordings – along with transcriptions – so you can share them on social media. You can even choose between 1: 1, vertical or landscape format.

The editing and sharing functions are new in Google Recorder. The app can also recognize music, dog noises, laughter and applause and mark them as such in the transcription. The transcription takes place completely offline and makes it possible, for example, to automatically mark the main topics of recordings when, for example, a lecture is being recorded.

I’m just here wondering how much easier this app could have made recording lectures in college.

Unboxing and hands-on of the Nokia 225 4G (Tumsoma)